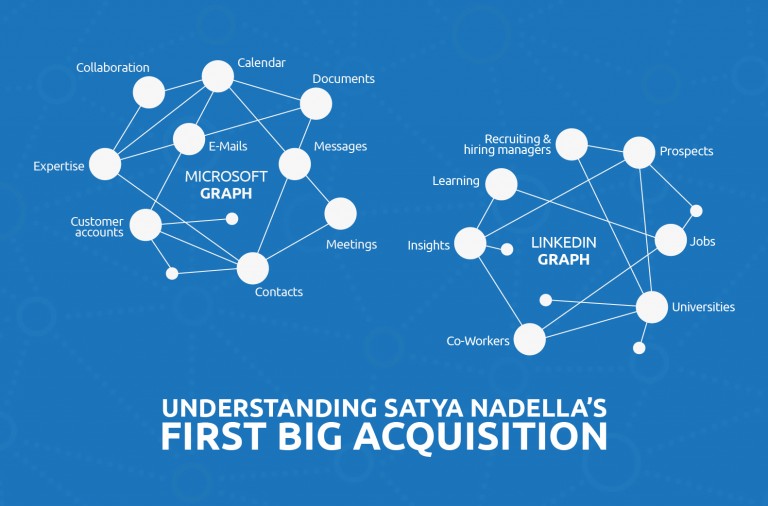 In October 2006, Google acquired YouTube for $1.6 Billion. The price tag seemed high at that time, but a decade since that, YouTube has emerged to be one of the major digital media players. This merger Monday saw Microsoft announcing the acquiring of LinkedIn for $26 Billion and one can’t help but recollect how the game changed for YouTube post 2006 acquisition.

LinkedIn is without doubt the world’s largest and most valuable professional network. It has a thriving business and is essentially the Facebook of the business world, and the digital storehouse of most of the world’s resumes.  Naturally an acquisition of such a massive social media platform by the pioneer of PC Software, questions are bound to be raised.

This is Microsoft CEO Satya Nadella’s first major acquisition and understanding why he took this big step is very important. Even though he hasn’t clearly stated what would be the use of LinkedIn post acquisition, it is easy to understand that Microsoft gets an instant access to over 430 million users and a chance to sell all of its business tools and related products. To Microsoft, LinkedIn would be a wide sales channel to sell more of its products. LinkedIn acquired Lynda.com to spearhead a move into offering online learning tools to users for professional development. It is a possibility that Microsoft post LinkedIn acquisition would engage Lynda in helping them sell their products and provide assistance in using the tools. Another important thing to keep in mind would be that previously Microsoft was unable to successfully establish itself in any of the social media platforms. LinkedIn is Microsoft’s giant boost to increase the company’s social networking presence.

It definitely gives Microsoft 100% share in the business social networking platforms, but, was it a smart move for LinkedIn? Jeff Weiner, CEO of LinkedIn, has done a tremendous job by building the company’s business in the past. However, despite all the talk about profits and growth, LinkedIn has been a money losing operation for the past two years. In February 2016, LinkedIn’s stock price plummeted more than 40% and the share price had hovered at $225. There has been some speculation if LinkedIn would be Microsoft’s next Nokia, which was a disaster as most of us remember it to be. Microsoft, for now, shall leave LinkedIn untouched. LinkedIn gets to keep it branding and product and will become a part of Microsoft’s productivity and business processes segment. This is a wise decision considering the previous acquisitions.

There are somethings that are misplaced when it comes to LinkedIn. It took LinkedIn a long time to upgrade to self-service ad management interface. The interface could still do with some improvements in terms of features and usability work. This is something that Microsoft should probably look into. A well-developed UI and UX for LinkedIn would do wonders.

When compared to the likes of YouTube and Twitter, LinkedIn has failed to explore the networking system because of its poorly managed API Management Tool. Microsoft has an API management tool, Apiphany. Hopefully, Microsoft would help LinkedIn scale up the ecosystem.

LinkedIn and Microsoft definitely shall strengthen each other’s products. For example, LinkedIn has a newsfeed that has a similar style to that of Facebook. Microsoft plans to integrate this newsfeed into the office 356 UI, which will allow users to track their professional growth. Microsoft’s primary aim is to integrate data from LinkedIn into Cortana, the personal assistant that is Microsoft’s answer to Siri and Google Now. So a future version of Cortana may have the ability to look up the phone number of a LinkedIn contact etc.

While all of this is understandable, there is something that should not go unnoticed. Google acquired YouTube, Facebook acquired WhatsApp and Instagram, and Microsoft acquired Skype and now LinkedIn. It is easy to notice a pattern here how several apps are losing the battle of surviving solely on advertising.

Twitter maybe popular, but it is currently on the outs. While Twitter’s strong presence in the digital world is undeniable, its future is under question. It does get a lot of attention, however, it is considered to be of little use to majority of people. While major brands have used, probably even overused Twitter to their benefit, it fails to appeal to average internet users. Overwhelmed by the constant influx of updates, new user generally quit or reduce Twitter usage. Despite its popularity through the years, it has failed to make money simply because they did not pay attention to being profitable.

Microsoft may not be discussing rivals just yet, but if there is anyone who needs to be worrying about being under pressure, it would be Google. Microsoft previously never had a digital platform presence, but with its recent acquisition, it has within its grab a powerful asset; a social database of over 400 million users. This definitely puts pressure on Google to go ahead with an acquisition of its own, in order to expand its reach with business customers. The ideal situation would be for Google to acquire Twitter. It’s definitely a win-win situation for both of them, considering how Twitter is on a downward spiral and Google is under the pressure of expanding its reach with business customers.

For Microsoft, it’s the missing piece of puzzle in the company’s strategy to build out more services for enterprises and for LinkedIn it puts to rest the worry of how it would compete with companies that are building more software. Maybe a decade from now, LinkedIn may grow to be a powerful digital platform, like YouTube did. But keeping aside all these speculations, we must agree on the fact that the acquisition is a big one for both Microsoft and LinkedIn.  It is clear that the two companies have aligned goals; to connect professional world and improve the world of business.