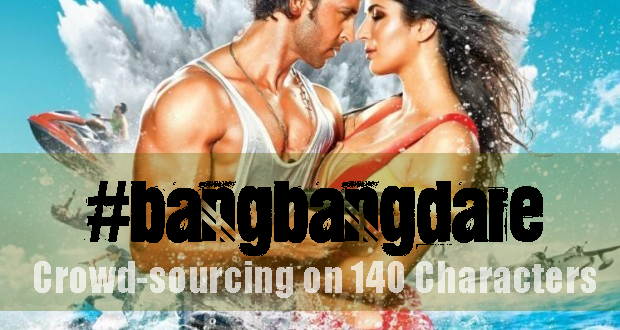 Festival days and long weekends are hot commodities in Bollywood, with everyone vying to release their movies on the best possible moment to maximize box office collections. Shahrukh Khan, Salman Khan and Aamir Khan have all been known to reserve Diwali, Eid and Christmas for their major releases. But this Dussehra and Durga Puja weekend in India is all about Hrithik’s return to commercial cinema with Bang Bang and the team using crowdsourcing. Apart from some jaw dropping action scenes and dance moves, this movie has also had a pretty quirky and unconventional marketing campaign going, which has the entire marketing and branding world going gaga about. Ladies and Gentlemen, we bring you – Twitter Crowdsourcing!

Crowdsourcing – literally the process of sourcing services, content or money from the crowd rather than dedicated employees, and Twitter – the 140 character limit social networking have already made quite a mark on our world, but it’s when these two came together in the Bang Bang marketing campaign that people woke up to its sheer possibilities.

We all have seen in recent years that Bollywood is really the modern day _baap_ of Marketing with publicity gimmicks and campaigns ensuring that movies make profits even before their release. The latest and brilliant addition to this list of creative ways to attract attention is Hrithik Roshan’s Twitter dares to fellow celebrities for the promotion of his movie Bang Bang by using crowdsourcing techniques. The premise is incredibly simple, yet effective. Hrithik (or the clever guys at the Bang Bang marketing department) realized that everyone has been advertising their movies by doing guest appearances in shows like Big Boss and Comedy Nights with Kapil, and decided to do something different (a blue ocean strategy, for you marketing people). He knew that his personal followers count on Twitter would be quite enough to make a crowdsourcing marketing campaign successful and generate interest, but he went one step ahead and utilized the popularity of other popular actors and friends like Farhan Akhtar, Salman Khan, Ranveer Singh, Aamir Khan, Shah Rukh Khan, Shraddha Kapoor, and others, acquiring brilliant returns through crowdsourcing..

About 15 days before the release of the movie, Hrithik started the process of giving dares to his friends in the industry, using the hashtag #bangbangdare. He dared his friend Dabboo Ratnani to do a 100 skips, Farhan Akhtar to go cycling wearing a swimming costume, Shraddha Kapoor to sing a song without wearing make-up, Shahrukh Khan to show his favorite exercise moves, and Aamir Khan to put the transistor (from PK) down! But there was nothing that caught as much attention as his dare to the crazy Ranveer Singh and Ranveer’s response to it. Hrithik challenged Ranveer Singh to dance for his fans in the middle of a busy road, and Ranveer not only accepted the dare, but he completely knocked it out of the park with what he did! Watch here to know what we’re talking about:

Now that’s some pretty awesome stuff in itself, isn’t it? But now let’s look into some statistics. Hrithik’s tweet to Ranveer itself was favorited by about 1500 people and retweeted by another 1200. And that’s not all, the actual video itself on YouTube has already amassed over 3 million views! And video for SRK #bangbangdare has got more than 1.5 M views.

In an age where it is becoming more and more difficult and costly to involve audiences, even if we take a conservative assumption, Hrithik would have been able to reach out to over 50 Million people on Twitter and Facebook within a matter of 5 to 6 days by using crowdsourcing.

And the best part – Without spending a single penny on crowdsourcing! If that isn’t effective marketing, what is!

We, as marketers ourselves, are really excited by the possibilities of such kind of creative campaigns in the market. And all we can say is, Dear Mr. Kotler, please take a bow, because Bollywood’s Greek God has clearly shown us that  : Lakshaya toh har haal mein paana hai!